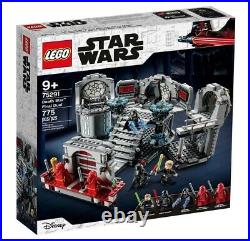 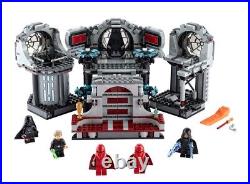 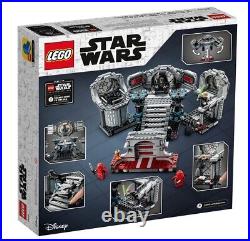 Kids can play out the epic Death Star Final Duel (75291) between Luke Skywalker and Darth Vader with this LEGO® Star Wars : Return of the Jedi building set. Emperor Palpatine's throne room has many cool features to inspire creative fun, including a LEGO minifigure Force-jump function. The stairs and bridge can also be collapsed, and Darth Vader can throw the Emperor in the reactor shaft just like in the classic scene. Role-play action This Death Star construction kit offers a testing building challenge and includes 5 LEGO Star Wars T minifigures with Lightsabers and force pikes for fans to role-play action-packed battles. It also comes with a code to unlock a character in the LEGO Star Wars : The Skywalker Saga video game. Great gift ideas Since 1999, the LEGO Group has been recreating iconic starships, vehicles, locations and characters from the Star Wars universe. LEGO Star Wars is now its most successful theme with exciting gift ideas to suit fans of all ages. Star Wars : Return of the Jedi fans can recreate the epic Lightsaber battle between Luke Skywalker and Darth Vader in Emperor Palpatine's throne room with this Death Star Final Duel (75291) building toy. This LEGO® Star Wars T Death Star final duel set comes with 5 LEGO minifigures - Darth Vader, Luke Skywalker and Emperor Palpatine with Lightsabers, plus 2 Imperial Royal Guards with force pikes, to inspire battle action. The throne room folds out for easy play and has lots of fun features including a LEGO® minifigure Force-jump function, collapsing stairs and bridge, rotating throne and a reactor shaft. This 775-piece Death Star construction kit offers a challenging and rewarding build for kids aged 9+.

It makes an ideal birthday present or holiday gift and combines brilliantly with other LEGO® Star Wars T sets. This buildable Death Star playset measures over 5.5" (14cm) high, 8.5" (22cm) long and 12.5 (31cm) wide. Use the code in the building instructions to unlock a character in the LEGO® Star Wars : The Skywalker Saga video game.

No batteries are needed with this awesome kids' building toy - it's built purely from LEGO® bricks and powered by children's imaginations so the fun, creative play never stops. It comes with easy-to-follow instructions so they will be building with Jedi-like confidence in no time. LEGO® Star Wars T sets are great fun for kids (and adult fans) who can recreate scenes from the Star Wars saga, make up their own original galactic adventures or simply display these awesome construction toys. Ever since 1958, LEGO® bricks have met the highest industry standards so they are robust, connect perfectly and pull apart easily every time - no need to use the Force!

LEGO® bricks and pieces are tested in almost every way imaginable so you can be sure that this Death Star construction playset meets the highest safety and quality standards on Earth - and in galaxies far, far away! _gsrx_vers_1292 GS 8.3.6 (1292). This item is in the category "Toys & Hobbies\Building Toys\LEGO (R) Building Toys\LEGO (R) Complete Sets & Packs". The seller is "jumpingbrick" and is located in this country: AU. This item can be shipped to Australia, all countries in Europe, all countries in continental Asia, United States, Canada, New Zealand.