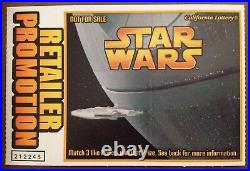 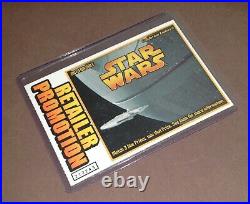 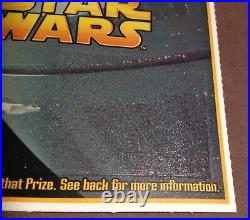 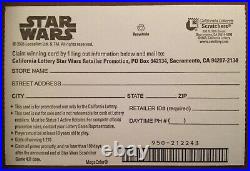 Cool Collectibles Are Added Weekly. Star Wars Death Star Millenium Falcon Retailer Promo Trading Card Lottery Ticket. These were given to authorized California retailers one-at-a-time based on large orders of regular public tickets. They were also only available at the beginning of the promotion as very few were printed!

Almost all of these limited edition cards were scratched by the lottery retailers and thrown away if not a winner or sent in to claim the prize. To find any existing card is an opportunity! To find an unscratched card is a treasure! Very few of these exist. Population reports indicate less than 10 currently known.

FEATURES: Death Star and the Millennium Falcon CERTIFIED BY COA: YES BIO: Star Wars is an American epic space opera media franchise , centered on a film series created by George Lucas. It depicts the adventures of various characters "a long time ago in a galaxy far, far away". The franchise began in 1977 with the release of the film Star Wars (later subtitled Episode IV: A New Hope in 1981), which became a worldwide pop culture phenomenon.

It was followed by the successful sequels The Empire Strikes Back (1980) and Return of the Jedi (1983); these three films constitute the original Star Wars trilogy. A prequel trilogy was released between 1999 and 2005, which received mixed reactions from both critics and fans. A sequel trilogy began in 2015 with the release of Star Wars: The Force Awakens.

Spin-off films include the animated Star Wars: The Clone Wars (2008) and Rogue One (2016), the latter of which is the first in a planned series of anthology films. The series has spawned an extensive media franchise including books , television series, computer and video games , theme park attractions and lands , and comic books , resulting in significant development of the series' fictional universe. Star Wars also holds a Guinness World Records title for the "Most successful film merchandising franchise". The former distributor, 20th Century Fox , was to retain the physical distribution rights for the first two Star Wars trilogies, was to own permanent rights for the original 1977 film and was to continue to hold the rights for the prequel trilogy and the first two sequels to A New Hope until May 2020.

THANKS FOR LOOKING COME BACK SOON MORE AWESOME TREASURES ARE ADDED WEEKLY!! PACKING METHODS: All flat paper items are sent in poly sleeves with over sized backing boards. Fragile and larger items are bubble wrapped and sent in sturdy boxes with peanuts. We maintain high standards on every level. CONDITION: Grading conditions are subjective. Be your own judge when deciding the condition of items vintage or new. We do have thousands of Positive Feedbacks and Return Customers. We try to provide clear information with known historical background on all our auctions. We sell VINTAGE AUTHENTIC ORIGINAL COLLECTIBLES that are intelligent investments and will continue to increase in value.