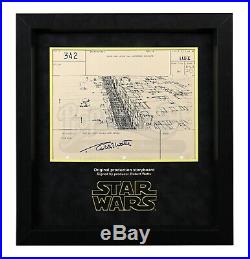 A signed original production used storyboard from the first movie in the epic George Lucas saga, Star Wars - Episode IV: New Hope. Comes with a COA from The Prop Store. This storyboard shows the surface of the Death Star as Luke, Biggs and Wedge dive into the trench in their final attack run.

The storyboard is labelled as part of the Luke filming sequence and as shot 342. This storyboard is printed on a sheet of peach-coloured paper and is hole punched at the bottom from where it was grouped in sequence, forming a comprehensive shot by shot miniature version of the movies spectacular and ground breaking effects. This piece has also been signed by the legendary veteran producer Robert Watts who also produced the Indiana Jones trilogy and Who Framed Roger Rabbit.

The storyboard comes beautifully presented in a custom built frame with laser-cut mount board featuring the classic movie title. The display measures 15.75 x 17.5. This piece displays very well and would make a great addition to any collection. Please check out my other listings!

Please Note: The artwork featured on this original storyboard is a copy of the master artwork. Copies were made and distributed to the appropriate crew members for filming. This is one of those rare, production used storyboards that has been autographed. The item "Star Wars Ep IV A New Hope Signed Production Storyboard Death Star Trench" is in sale since Thursday, January 23, 2020. This item is in the category "Entertainment Memorabilia\Movie Memorabilia\Storyboards & Concept Art". The seller is "traceyhamilton" and is located in Monroe, Ohio. This item can be shipped worldwide.