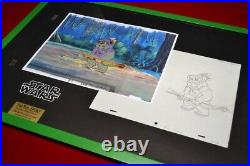 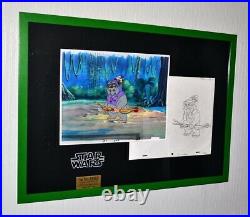 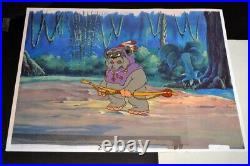 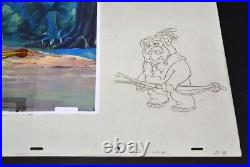 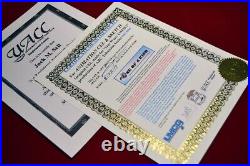 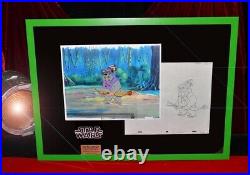 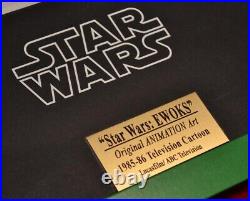 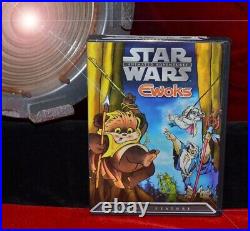 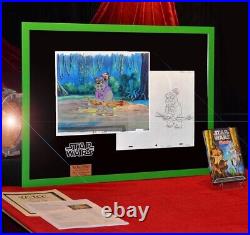 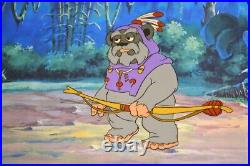 Check out our NEW Star Wars PROPS & COSTUMES from "The Rise of Skywalker" filmed at Pinewood Studios + genuine "DEATH STAR" pieces from "Star Wars IV" - a real "One of a Kind" Opportunity! "Star Wars" ANIMATION CEL from "EWOKS" TV Series. One of the Great Animated TELEVISION SHOWS! An Original Screen-Used hand-painted ART CEL of an EWOK from the ABC TV Show. Original pencil SKETCH of EWOK on the notched paper.

A Frame that has both pieces of art displayed nicely together with acrylite glass and engraved PLAQUE and "STAR WARS" Logo. Original CERTIFICATE OF AUTHENTICITY from UACC Registered Dealer #228. A DVD of some of the Television shows, NTSC U. As a TV & Movie DIRECTOR and a lifetime member of the Director's Guild of America, D. Sell is offering some rare props & collectibles from his personal collection from some great television & motion pictures, including "STAR WARS, " "RESIDENT EVIL, " APOLLO 13, " "STAR TREK, " "AMERICAN PIE, " "DIRTY DANCING, " "E.

", "WARM BODIES, " "CASINO ROYALE, " "bruno, " "GONE WITH THE WIND, " "CHRONICLES OF RIDDICK, " "HANNIBAL, " "BATMAN, " "IT'S A WONDERFUL LIFE, " "SUPERMAN, " "GHOST, " "NATIONAL TREASURE, " "SKYFALL, " "SPIDER-MAN" & "PIRATES of the CARIBBEAN + dozens of other Films & Television shows, many destined to become Classics that will live on for millions of viewers for years to come. I've been a D. This particular "EWOK" & "STAR WARS" collection includes an Original Screen-Used ANIMATION CEL ARTWORK & Original SKETCH by the LUCASFILM Artists.. " EWOKS" & The All New EWOKS.

This cel was actually used in the making of the legendary cartoon, and is a RARE Cel with the Background piece and Sketch from this TV Show. This key Cel art has notches, various markings at the bottom of the cel to help position & log where this scene is used in the television show.. These 2 pieces of original art are in overall good condition... Colors are bright and highly detailed with clean sharp lines and great paint.

It includes the ORIGINAL Certificate of Authenticity (COA) from UACC Registered Dealer #228... You also receive a copy of some of the "EWOKS - STAR WARS Animated Adventures" Television Shows in a DVD so you can view this fun show! Here are the episodes on the DVD!

This ORIGINAL Screen-Used ANIMATION CEL & SKETCH is framed in a large new Wood Frame to highlight the ART & an added "STAR WARS" logo & engraved Brass PLAQUE attached to the acrylite glass on the front... Just ready to just hang on the wall in your Home, Office, Media Room or Museum.. The FRAME measures approximately 29" x 21".. The "Star Wars" LOGO & Brass engraved description Plaque mounted on the display reads. This ORIGINAL Ewok "STAR WARS" ANIMATION CEL is from the animated television series that follows the adventures of the Ewoks of Bright Tree Village prior to the Battle of Endor.

The primary recurring villains are Morag the Tulgah Witch and the Ewoks' rival species the Duloks. Produced by Nelvana on behalf of Lucasfilm, Ewoks was broadcast on ABC from 1985 to 1986.

The first season was advertised as simply Ewoks, and was aired as part of the Ewoks and Droids Adventure Hour, whereas the second season was advertised as " The All New Ewoks". All the Cels & Sketches in this television series were drawn & colored by hand by artists at LUCASFILMS Studios... This is a great EWOK "Star Wars" character that will be enjoyed for generations to come. These Cels are very hard to find in the marketplace and rarely ever made available to the public.

What a wonderful & interesting history for any "STAR WARS" fan regarding art & animation... And a valuable gift that could become a good investment for the future! Check out our other auctions for more Movie Collections that include wardrobe, props & autographs from a variety of TV & Movies.

Sell is a Registered Dealer with the U. We are proud that some of our memorabilia on display in the SMITHSONIAN, Washington, D. Heimdell51 Praise: Great guy; very prompt & efficient service & exc. Packaging; got a free bonus too!

Austinpowheinybeer Praise: GREAT GREAT GREAT!! Toothfella Thanks for the super helmet Jack! Hope to do business again. Jimsoden Praise: Great packing, good emails, very generous with his time and effort, class act!!! Circus10 Praise: Fabulous costume, vintage RBBB. Belfast Praise: Wonderful Ebayer & with genuine COA's too! Our photos are included as part of our ad. This Art has been stored in an acid free case, in a temperature controlled, pet free, smoke free environment. This is An Original Screen-Used hand-painted ART CEL of an EWOK from the ABC TV Show, Original pencil SKETCH of EWOK on the notched paper, a Frame that has both pieces of art displayed nicely together with acrylite glass and engraved PLAQUE and "STAR WARS" Logo & a DVD of some of the Television shows, NTSC U.

If this autograph is declared not to be authentic, we may ask the purchaser to supply the full written opinion of one competent authority acceptable to us. A GREAT piece of "STAR WARS" history & memorabilia..... A real "One of a Kind" Find & Conversation Pieces for both ANIMATION ART COLLECTORS + "Star Wars" EWOK Fans... Movie & Television Art, Props & Autographs could make for a good investment as well! Check out our other auctions for more great items, including more Art, Props & Costumes!

A GREAT collectible "STAR WARS" COLLECTION from the 1985 television series on ABC. A VERY RARE & VALUABLE ONE OF A KIND FIND!!